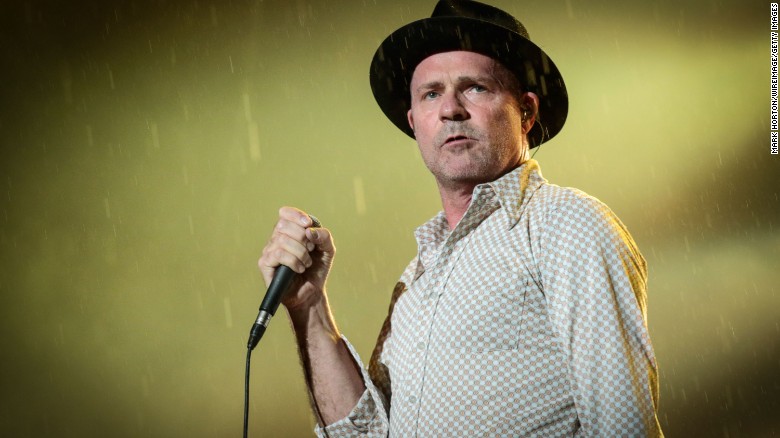 Downie was diagnosed in December and "since then, obviously, he's endured a lot of difficult times," the band Tuesday morning.

For 30 years, Tragically Hip has been one of Canada's most successful acts, racking up 14 Juno awards and nine No. 1s. And the 52-year-old Downie is one of its most charismatic singers.
The band said it's planning a summer tour -- its way of dealing with the news.
"This feels like the right thing to do now, for Gord, and for all of us," the post said.
"What we in The Hip receive, each time we play together, is a connection; with each other; with music and it's magic; and during the shows, a special connection with all of you, our incredible fans.
"So, we're going to dig deep, and try to make this our best tour yet."

Let's hope and pray for a miracle for him. One of my ATF bands.
D

Can anyone beat brain cancer?.

Joined Apr 9, 2011
Messages 1,008
In Canada Tim Hortons, and The Tragically Hip are ubiquitous. This is sad news. Not just because he is famous up here, but because he is another person who cancer is going to kill
A

Joined Jul 7, 2012
Messages 1,859
Tragic and sad, most should take notes and enjoy live till its fullest as it can happen to anyone.


The U.S. Food and Drug Administration granted breakthrough therapy designation this month to a polio virus for the treatment of recurrent glioblastoma brain cancer. The designation came after nearly unprecedented results during a Phase I clinical trial from Duke University researchers.

The results are so promising that CBS aired a followup segment on 60 Minutes on May 15 tracking the progress of the trial.

FDA’s breakthrough designation helps the researchers expedite the development and review of the drug for which its success shows a substantial improvement over available therapy for brain cancer. In the case of recurrent glioblastoma, the extremely aggressive tumors grow and spread rapidly, leaving patients with less than a year of survival even with the existing aggressive treatment options.

Although the designation does not indicate approval for the drug, Duke’s brain tumor center director Dr. Darell Bigner said, “Ultimately, we hope the therapy will one day obtain FDA approval.”

However, the researchers found that when the modified polio virus is introduced into the cancer cells, the body perceives a polio infection and, ultimately, is tricked into attacking the cancer cells.

The virus not only breaks down the cancer cells, but enables the immune system to attack, giving the cancer a doubly lethal blow.
“This, to me, is the most promising therapy I have seen in my career, period,” said world-renowned Duke University neuro-oncologist, and one of the leads in the trial, Dr. Henry Friedman.

The researchers were shocked by the successes they saw in the Phase I trial, which are typically used to allow the researchers to find the appropriate dosing. However, Dr. Friedman,

Deputy Director, The Preston Robert Tisch Brain Tumor Center at Duke University, said any other results are “cake.” The researchers got the “biggest cake we’ve seen in a long, long time,” according to Dr. Friedman, when the first infusions in patients led to an attack on the tumors leaving them virtually cancer free.

The first patient to be accepted into the clinical trial, in 2012, was 20-year-old nursing student Stephanie Lipscomb. At the time, she was out of options when she opted to participate in the trial. Now, four years later, she is an oncology nurse and, not wanting to waste her experience, has vowed to help other young oncology patients as she turns to Pediatric Oncology as her career.

“I had nothing to lose, honestly,” said Lipscomb when asked if she knew she was the first human to undergo the treatment.
Two other patients featured in the program are also three-year survivors after receiving the treatment in 2013.

“To see positive results in terms of controlling a tumor, or shrinking a tumor, in patients with a recurrent disease on a phase I trial is remarkable. This is really terrific, this is special,” said Friedman.

As with any clinical trial, some patients were not so fortunate and passed away during, or shortly after, receiving the medication. In one case, the dosage was too toxic for the patient. However, the researchers, the participants – even when in failing health – and the participants’ families all remained positive.

The Duke researchers learned key information such as dosage limits and the benefits of following the polio treatment with chemotherapy.
“If this gives other people hope, I’m all for it,” said Nancy Justice who participated in the trial and battled the cancer for over two years before succumbing to the disease in April, 18 months after receiving her infusion.

The researchers say that the polio virus seeks out receptors on nearly all kinds of cancer cells, leading them to believe the virus could be as effective in other cancers. The Duke researchers have now begun testing on other cancers including breast and lung.

Their next step is to take the drug to hundreds of patients via clinical trials . With the drug fast-tracked and with the anticipated continued success, the team is hopeful the drug will soon be available for treatment to patients.

“You know, I’m very reluctant to use the cure word, the C word as we call it because we don’t know how long it takes to say that a glioblastoma has been cured,” said Dr. Darell Bigner. “But I am beginning to think about it.”

Joined Jan 22, 2014
Messages 650
He ain't dead yet. He'll probably be getting the best treatment money can buy. He could go on for years. Hell, they have a cross Canada tour planned. And, if he starts smoking weed, he will be cured.
You must log in or register to reply here.

B
Any type of battery could potentially be a problem. Just a warning.

Kind Of Puts Everything Into Perspective