Nasty Nastja at the Palace in Frankfurt - Oct 2019

I had read many negative things about this club over the years so me and my traveling buddies always gave it a pass when we were in Frankfurt. On this trip two other friends LTO & Vinnie were with me & they wanted to check out the club so we went there on a Sunday and did the early bird 50 Euro special. The special included everything including Robes but we didn't get the one free beer that goes with the 75 Euro regular entry. After a shower we went into the main room and were impressed by the nice layout and also by the quality of the Girls there. We had visited two other clubs the day before so we decided to rest up and relax for awhile before doing any rooms.

At the bar we were soon approached by some of the more aggressive girls . Since we were only planning on doing a session later that evening , if any at all , we decided to talk to the Girls instead of telling them we weren't interested. When a girl came up to me and began rubbing her body against me I asked one what the cost of a room was and she relied it was 30 min. for 50 Euros. I then asked what that included she said we can talk about that in the room. Many of the negative comments about this club was about up-selling. I told the girl I wanted kissing , bbbj , 69 , & sex with a condom & I asked what that would cost. She hesitated but then said 100 Euros. I told her I would think about it and she left. My friends were also chatting with the girls but then I saw LTO leaving with a very tall Skinny Ass Girl named Leanna. Later he said she was ok and it was only a CBJ . She charged him 100 Euros.

Vinnie and I were having fun at the bar letting the Girls rub up against us as they tried to get us to a room. Then I was approached by two Ukrainian Girls from Odessa. One was a thin cute 23 yo girl named Nastja with long brown hair to the middle of her ass and her friend a very attractive 22 yo Blond with a hot body named Nadia. They wanted me to take both of them to a room . When I asked about the cost Nastja said we can talk about that in the room . I told them what I wanted and again asked the cost. Nastja started with " but My Love .. we can have such a good time together in the room" avoiding my question. I just smiled at her . Then Nadia quietly told me it would 100 Euros each. Both Girls were looked hot so I told them Here's the deal .... I would see them both about 9 PM because I wanted to eat and enjoy the atmosphere for awhile . It was about 6 PM at the time. Nadia said they would be back and the girls headed off to find someone else.

We hung out at the Bar and then in the Loft lounge area talking to the girls who approached for a while. LTO went off with a Glasses Girl named Jennifer who also only did CBJ for 100 Euros. He said she was a great GFE and was well worth the cost. Vinnie on the other hand decided not to see anyone as he had seen three girls the day before and wanted to save his strength for Sharks which we were visiting the next day. When we first arrived at the club there was only some cakes and pastries in the dining area. It was now 7 PM so we went to eat some real food. We all ended up agreeing the food here was the best we had at all the 20 some clubs we visited on this trip. We ate our fill and went to the lounge area to relax & digest our food.

Around 9 PM I went looking for the Ukrainians but couldn't find them . About a half hour later I found Nastja and told her I was ready. She took me to a Loveseat and told me to wait while she looked for Nadia. When she was 6 feet away she turned and came back to me setting her purse next to me and left. I figured she wanted to mark her territory to keep another Girl from snagging me while she was gone. Five min. later she returned without Nadia and told me Nadia was busy and we would have to wait. The next day was a busy one for me and my friends so we planned on not staying late at this club. I told Nastja I didn't have time to wait and she replied that Nadia will be disappointed. Then she took my arm and said " We can go to the room now My Love". I really wanted my Ukrainian sandwich but something was better than nothing so we went to a room.

In the very nice room Nastja & I got on the bed and she cuddled up next to me . I decided to clarify the price and told her I would give her 100 Euros for the services we discussed. She seemed a little taken back but quietly said OK. She began to lightly kiss me and then she said " My Love there are extras that would make it more fun". At this point I need to tell you that I had no expectations of this being a romantic session but rather just a Fun Fuck. I decided to find out what extras she was talking about so I asked her about them. As she rubbed my chest she said throwing out all kinds of things some of which were " you can lick my ass or I can lick your ass " & " You can cum in my mouth or on my face ". Then she said that I could Fuck her ass . I looked at her and placed my hand on her pussy and told her why would I want to Fuck her in the ass when I have a perfectly good pussy here to Fuck? She replied " But My Love" then she held up her thumb & finger in an OK sign and said "My pussy is this big " she then curled her finger inward and said " But my ass is only this Big". I told I would only fuck her pussy. Her voice then became higher and she said " My Love it is much better fucking my ass". Again I laughingly said I would Fuck her pussy. Nastja then sat upright and in a very loud high pitched voice she shouted out " FUCK MY ASS !" then she blushed & let out a nervous laugh realizing what she just did.

I decided enough of this .... it was time for a blowjob and I asked her to suck my Dick. Nastja moved down and began what turned out to be a really good BBBJ. For some strange reason she rubbed my balls with the palm of her hand while she sucked me. There were Mirrors on the walls and I turned my body a little to watch her blow me. Nastja would take me deep in her mouth then firmly suck upward to the head before repeating the motion over and over. It was so good I must of spent a good 5 min. letting her sucking me off that way. Then I started thinking this is crazy Nastja . Maybe she is trying to get me to finish in her mouth to run up the tab. I was getting close so I told her I wanted to lick her pussy. She laid on the bed and I licked her perky tits with their pink puffy nipples for a while before moving down to her honey pot . Nastja was soon responding to my eating her meaty pussy and her flat hard stomach began to quiver. I had calmed down enough by now so I had her turn for some 69 so I could enjoy more of her great oral skills.

Next I had her apply a condom and she sat on my Dick. Damn ... she was right.( Not a typo) Her pussy was a little loose. I told her I wanted to do Doggy and she reached behind to guide me in. Again a thought crossed my mind and I reached down to make sure my Dick went into her pussy and not somewhere else that would cost me extra. Fucking her from behind was a snugger fit but her pussy was so wet that there wasn't very much friction. I decided to squeeze the sides of her ass inwards for a tighter fit while I pushed my Dick into her pussy. Nastja reached in and rubbed herself for awhile & then she decided to help me out by rubbing my balls. As our time was running out I turned her over and lifted her legs to get as deep into her pussy as possible. To my surprise I was actually feeling something deep in her wet pussy sort of milking my Dick and I soon popped .

This turned out to be a really nice Fun Fuck. I paid her the 100 Euros at the locker and she kissed my cheek. I never did ask Nastja what the extras would actually cost but I imagine they wouldn't be cheap.

After a shower and a snack me and the guys left. We all agreed we would come back to this club in spite of the up-selling.
Recommendation: Yes 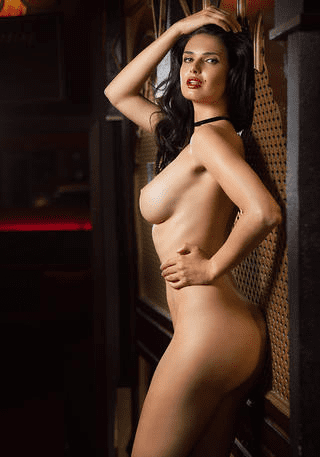