Joined May 18, 2011
Messages 143
HOUSTON -- The second deadly crash of a prized new airplane in five months has renewed safety concerns about the 737 Max that could shape Boeing's fortunes for many years.

The 737 Max is the newest version of the 737, the bestselling airliner ever. Since debuting in 2017, Boeing has delivered more than 350 of them in several versions that vary by size.

Dozens of airlines around the world have embraced the plane for its fuel efficiency and utility for short and medium-haul flights. [h=1]Growing number of Boeing Max 8 planes grounded after crash[/h] 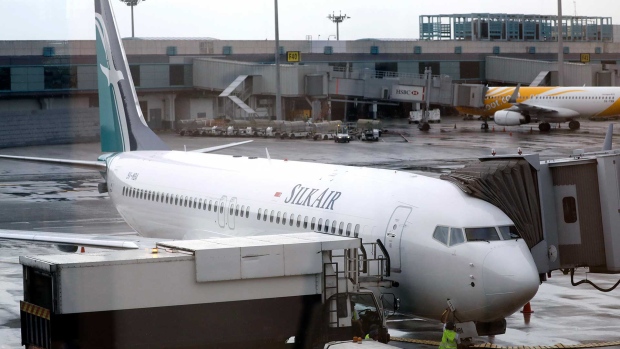 HOUSTON -- The second deadly crash of a prized new airplane in five months has renewed safety concerns about the 737 Max that could shape Boeing's fortunes for many years.

The 737 Max is the newest version of the 737, the bestselling airliner ever. Since debuting in 2017, Boeing has delivered more than 350 of them in several versions that vary by size.

Dozens of airlines around the world have embraced the plane for its fuel efficiency and utility for short and medium-haul flights.

Boeing has taken more than 5,000 orders for the various Max versions, and they constitute the largest share of the company's backlog of nearly 5,900 planes. They carry list prices from $100 million to $135 million, although airlines routinely get deep discounts.

The plane suffered its first fatal accident in October, when a 737 Max 8 operated by Lion Air plunged into the Java Sea, killing 189 people. Boeing bounced back, however, with little apparent effect on new orders.

However, the second deadly crash for a Max 8 on Sunday in Ethiopia, which killed all 157 people on board, could prove far more damaging if investigators find fault in Boeing's design or airlines and their passengers lose confidence in the jet.

Crucially, however, there was no outward sign that the influential U.S. regulator, the Federal Aviation Administration, would do the same.

Transportation Secretary Elaine Chao said her department, which includes the FAA, was "very concerned" and monitoring developments around Sunday's crash. She said she met with acting FAA Administrator Dan Elwell to discuss the situation "and what are our possible paths forward." She didn't say whether the agency was considering grounding any planes.

It's unusual for authorities to take the step of grounding planes, and it's up to each country to set standards on which planes can fly and how those planes are maintained, said Todd Curtis, an aviation safety analyst who directs the Airsafe.com Foundation.

In the last major FAA recall, the agency grounded Boeing 787 passenger jets in 2013 after several instances in which lithium-ion batteries overheated. The plane was relatively new at the time. United was the only U.S. carrier affected, with six planes grounded.

Late on Monday, the FAA issued a statement saying that while others have drawn similarities between the Indonesia and Ethiopia crashes, the agency was not.

"This investigation has just begun and to date we have not been provided data to draw any conclusions or take any actions," the FAA said.

The FAA also said that no later than April it expects Boeing will complete changes, including new training for pilots in automated anti-stall technology that is suspected of playing a role in the Lion Air crash. Data released by Indonesian investigators indicates that pilots struggled unsuccessfully to counter the system, which repeatedly pointed the plane's nose down and may have sent it into a death spiral.

A consumer group, FlyersRights.org, urged the FAA to ground the Max 8.

U.S. airlines repeated their belief that the plane is safe.

American Airlines, which operates 24 Max 8s, said it bases its judgment on collecting extensive data on its entire fleet, including the Max 8.

"We have full confidence in the aircraft and our crew members," the carrier's vice-president of flight service, Jill Surdeck, said in a memo to employees.

Southwest Airlines operates the largest U.S. fleet of Max planes, with 34 Max 8s. Spokesman Brian Parrish said the airline remains confident in their safety. United has about a dozen Max 9s, which are slightly bigger than the Max 8.

Dozens of Max aircraft crisscrossed the skies over the United States on Monday, and passengers continued to board them and fly without incident. Passengers interviewed at Houston's Hobby Airport were keenly aware of the crash in Ethiopia. They expressed concern but no panic.

"I drive in Houston every day," said Brian Browder, who was waiting for a flight to Washington, D.C. "That's the place to be worried."

Still, Browder, who works for a construction-industry trade group and flies several times a month, said he would be "a bit apprehensive" about getting on a 737 MAX.

"They need to explain exactly what happened and why," he said.

Kelly Wells, a health care worker from Austin, believes a catastrophic accident is less likely to happen in the United States.

"Those pilots are very well trained to handle an emergency. I'm in capable hands," she said before a flight on Southwest, which operates the Max, although her flight was not among them.

Peggy Chang Barber, a lawyer for a Houston non-profit who was on her way to New York, said U.S. airlines are "pretty vigilant" about maintenance and pilot training, and she won't be concerned "unless they find a fault with the plane."

It isn't clear yet whether the plane's technology played a role in the Ethiopian Airlines crash, or whether that accident is related to the deadly Lion Air accident on Oct. 29 in Indonesia.

Even if Boeing must make software or hardware changes to the plane, "it's nothing they can't get past, but it would be an expensive process," said Richard Aboulafia, an aviation consultant with Teal Group.

"Historically, (airlines) cancel orders because of (fuel) performance shortfalls or because somebody else gave them a discount -- not because of safety," Aboulafia said.

The FAA stripped the McDonnell Douglas DC-10 of its airworthiness certificate after numerous safety problems including a 1979 crash in Chicago, yet it still outsold a rival plane made by Lockheed, he said.

Joined Mar 27, 2018
Messages 1,411
Sounds similar to an Air France crash over the pacific in an Airbus, were the pilots fought the plane all the way until crashing in the ocean.

Some are blaming pilot error for that also.

Any airline pilots here ?
A

ROBERTSON;n1464667 said:
Some are blaming pilot error for that also.
Click to expand...

Still find it hard to reason that 2 of the same Boing model crashed within a year.
D

Joined Nov 22, 2016
Messages 1,221
I heard a report that is saying the new technology is opposite of what an experienced pilot would due if a certain thing was wrong.
The plane will automatically due the opposite and if the pilot tries to correct he would fight the electronics and never get it back.
This latest pilot had 18 plus years of air time and they were talking to him as the plane was in distress.
It is going to be interesting to see how this gets resolved.
And how about the passenger who was 2 minutes late for boarding and missed the flight!!!!!

DILLIGAF;n1464687 said:
I heard a report that is saying the new technology is opposite of what an experienced pilot would due if a certain thing was wrong.
The plane will automatically due the opposite and if the pilot tries to correct he would fight the electronics and never get it back.
This latest pilot had 18 plus years of air time and they were talking to him as the plane was in distress.
It is going to be interesting to see how this gets resolved.
And how about the passenger who was 2 minutes late for boarding and missed the flight!!!!!

Ya I heard that also, but having some one one the ground with possibly no experience in that plane, wouldn't help.

I heard another "expert" state that this plane has a new version of anti-stall, which means that if the system thought the plane was stalling, it would push the nose down to gain air speed, then if the pilot was not aware that this was happening, he would try to pull the nose up, which would only make the anti-stall try even harder to push the nose back down.
Which seems to be confirmed by the flight path.

IF, this is the case, then either poor training, or that feature cannot be disabled, which in my lowly opinion, is wrong.

There is 350 of them flying and not a peep about any issues.

The Air France Airbus that went into the ocean, apparently did so flat, which means it was stalled, all the while the pilot(s) were fighting the controls with what appears to be after thought joy sticks off in the corner of the cockpit.

My, again, lowly opinion, too much automation, and no options.

Wasn't this how Buck Rogers became a hero, the "space ships" were fully automated, but some how became non functional, the original hack :biggrin2:, and he was able to "fly' without automation, when nobody else could.

Joined Aug 12, 2011
Messages 17,542
I agree it is too much automation to fast without the proper pilot training to complement the new gizmos and software. .
0

Joined Mar 27, 2018
Messages 1,411
Also heard that some pilots stated that the manual for these planes was lacking to the point that one pilot called it "criminal".

A thought, these planes seem to be marketed as fuel efficient.

Which makes me think that this new automation is part of the fuel efficient strategy, by having the computer exercise more control during climb out to save more fuel than a human could.
Hence the fight between man and machine.

I was on a new catamaran in the Caribbean recently, and this boat had a computer system that could/was running everything, including heading and sails.

The very experienced captain, who actually sailed it over from South Africa were it was made, said the computer could always do a better job than a human.

But of coarse, he new exactly how to turn it off.

Joined Mar 27, 2018
Messages 1,411
Apparently there is a "software update" for these planes, supposedly for the new "anti-stall" system.

I'm still of the opinion that what was happening was due to other automation, don't remember the name, to improve efficiency during climb out.

But I don't think Boeing would want the public to know that hundreds died due to a marketing claim.

Time will tell, or a leak.

Anti-stall warning systems have existed for quite some time, but were/are intended to warn the pilot, not overtake the controls of the plane.
F

Joined Nov 22, 2016
Messages 1,221
Now reports are coming out saying that some of the features on these planes are "Optional"
Budget countries and low budget airlines may not purchase all or any of the features in the plane!
So all Max 8s are not equal!!
Well I can see the lawyers just salivating on this one. They must be lining up just waiting to get at this.

Joined Mar 27, 2018
Messages 1,411
I personally wouldn't think that something like mcas would be optional, as I understand, it was added to compensate for the instability induced by the new engines and position on the wings.

This site is really good at explaining a lot of what this subject is about.

As I understand, a lot of military aircraft are impossible to fly without computer aids.

I really don't understand how any of this happened, considering the astronomical amounts of money involved, well maybe there is an explanation, in a tweet mentioned in another thread here, something about about buying education, influence and positions in careers.
You must log in or register to reply here.