Joined Apr 16, 2015
Messages 2,197
TORONTO -- One of Ontario’s leading privacy experts wants the provincial government to change a regulation directing establishments to take the personal information of customers to help with COVID-19 contact tracing.
The regulation, which applies to bars, restaurants and tour boat operators, instructs them to ‘record the name and contact information of every patron who enters an indoor or outdoor dining area in the establishment,’ and ‘maintain the records for a period of at least one month’.
The regulation is set to come into effect Friday August 7. It does not apply to patrons who temporarily enter the area to place, pick up or pay for a takeout order.

Ann Cavoukian is a former three-term privacy commissioner of Ontario, now the executive director of Global Privacy and Security by Design.
“I completely object because there is no semblance of privacy at all,” Cavoukian said in an interview with CTV News Toronto Monday.
“I am familiar with lists containing personal information. They’re rarely deleted securely, it could get into the wrong hands, it could compromise you in some way that we can’t anticipate.”
“They shouldn’t require to keep such a list,” she said. “I want the government to change what they’ve done with this regulation.”
Cavoukian said she has been in the business a long time and knows that the most unexpected information can be hacked because it’s of value to someone who we can’t imagine or anticipate.
In a statement to CTV News Toronto, the government said the information will be required to be kept for 30 days, and could also include a name and email.
“The person responsible for the establishment must only disclose the records to a medical officer of health or an inspector under the Health Protection and Promotion Act on request,” a spokesperson said. “Using or disclosing information inappropriately is an offence under the Act.”
“These are reasonable measures that will dramatically improve and speed up contact tracing in the event that a positive case can be linked to the establishment. In doing so we can better contain spread and help save lives,” the spokesperson said.

Cavoukian’s solution: COVID Alert App
Last week the COVID Alert contact tracing app was released after being developed in consultation with the privacy commissioners of Canada and Ontario, which lets users know they may have come into contact with the virus.
“Totally privacy protected. It’s based on the Apple, Google framework. It doesn’t store any other your personal information.”

Cavoukian said it’s ridiculous that people should not enjoy going out after months of isolation.

“Encourage them to use the alert app, which will be better at notifying individuals if they’ve been in contract with people who are COVID-19 positive,” she said.
“You have a life and you have a right to have privacy associated in your personal life, and when you’re going to a restaurant with someone, that is very personal, it’s you and whoever you wish to be there with., which you may not want to tell the world about.”
Businesses and customers react to contact tracing and privacy concerns
In Toronto, some establishments have been collecting names and phone numbers for several weeks. The bylaw has been different in that it asks for the name and number from at least one person in the party.
Toronto Public Health said that on Monday, establishments should post a notice so patrons are aware this information is being collected.
Dr. Vinita Dubey said each establishment is required to store customer log securely for 30 days, and the city’s bylaw dictates that after 30 days have been reached, each establishment must destroy the customer log.
Russ Piffer is the co-owner of The Edmund Burke on The Danforth and since being allowed to reopen business is moving in the right direction.
“It’s not too bad. I mean you just show up with the sheet and people sign it. Most people haven’t objected. The only thing I’ve heard people not love is saying when they are here and when they leave,” said Piffer.
“It’s been going good so far. We’ve probably had a few people who are opposed to it. Most people do reluctantly give their information out,” Amalan Vijeyaratnan, general manager at Allen’s, also on The Danforth.
Both establishments said they felt confident about keeping the information secure.
“It’s not much different, than when we take reservations,” Vijeyaratnan said.
Monday, Chantel Harding dined on a patio with her husband and baby.
“I’m not too concerned about it. I think it makes sense for contact tracing,” Harding said. 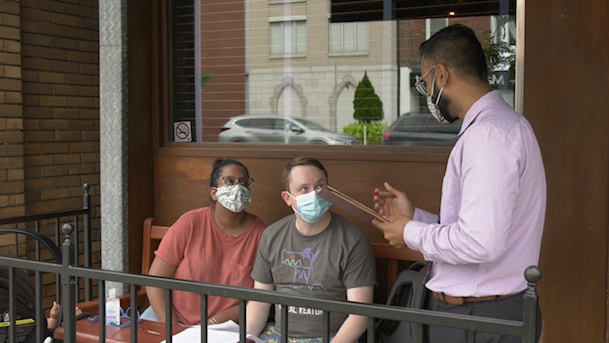 One of Ontario’s leading privacy experts wants the provincial government to change a regulation directing establishments to take the personal information of customers to help with COVID-19 contact tracing.
toronto.ctvnews.ca

I didn’t think I would like it and I didn’t at the time but 2 mins after seated, I didn’t care

Plus the system is flawed. You can give any name and number. The restaurant will never know.

But for me, if COVID broke out, I would like to know so I give the info.

If I don’t like, then I don’t need to go out to eat. That is a Privilege, not a right.
You must log in or register to reply here.

A
If you refuse to purchase in any store or establishment you can be asked to leave.