I saw a listing for a Malaysian named Monica and after a few texts I went to the address given which I had been to a few times previously. After ringing the bell I was let in by a cute petite girl who was not Malaysian. I asked her name and she replied ShueLee. She looked good so instead of asking for Monica I took the bird in hand and let her lead me to her room.

In the room I gave her the 120 Canadian Donation and leaned in to kiss her. She turned her head. I told her the listing said kissing but she looked puzzled . As she took out her phone to show me the listing I remembered this was not Monica. I told her never mind and then quickly tried to change the subject by asking where she was from & how old she was. She didn't speak very much English so she took out her phone and motioned for me to speak into it. I repeated my questions & also asked what her name was again. She then read the translation & spoke into her phone . It said her name was Shirley and she was 22 yo from Taiwan.

I undressed & Shirley motioned for me to get on the bed and she joined me. She began kissing my nipples as she massaged my Dick. I motioned for her to remove her clothes which she did. She had very little tits but her dark nipples hung down about an inch. Shirley went back to licking my nipples then she moved down to lick my balls & Dick with the tip of her tongue. After teasing me for a while she began to suck my Dick. She gave me a nice bbbj with some ball licking every so often. I tried reaching in to massage her tits but I couldn't feel much.

Next I pulled her up and motioned for her to move next to me. I kissed her neck and rubbed her pussy before moving down to suck on her nipples. As I sucked one in my mouth they stretched out even longer. Shirley began making moaning sounds so I moved down to lick her pussy. Soon she was moaning louder as my tongue was teasing her tiny clit. I licked and twirled my tongue on her clit until she juices began to flow.

I moved up and told her I wanted to do doggy and she applied a condom.
The bed was very low to the floor so I couldn't do any edge of the bed Doggy that I like so I moved behind her. I began Fucking her on a downward angle and she let out a series of very loud groans. Her pussy was so warm and tight that it wasn't long before I began to feel stirrings. I wanted the nice feeling of her snug pussy on my Dick to last longer so I reached down and pulled her hips up against me so I could get deeper . At the same time I slowed down just to grind into her pussy hard for a while. That helped me calm down some. Then I had her turn over so I could get on top. Again I tried to slow down but Shirley wasn't having any of that. She wrapped her arms around my back and began bucking her hips into me faster than I was fucking her. I only lasted a short time before I popped.

Except for the no kissing it was fun fucking this Girl. I never asked about Monica so I don't know if there is another girl there or the listing was just a bait & switch. The person I texted knew English so I suspect there is a handler that books the calls.
Recommendation: Yes

Joined Dec 19, 2009
Messages 836
I commend you TP for your luck with the Asian ladies. Wish I had your courage (and luck) to take a chance at one of these Asian locations. Although the so called pic of Monica looks very enticing and had me consider taking a chance, knowing my luck Monica doesn't look anything close to the pic...even knowing Asian pics are rarely real. 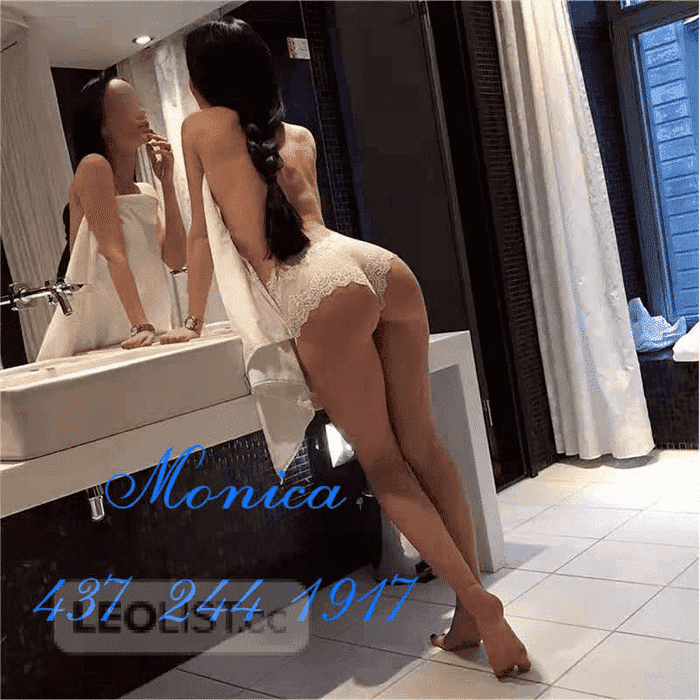